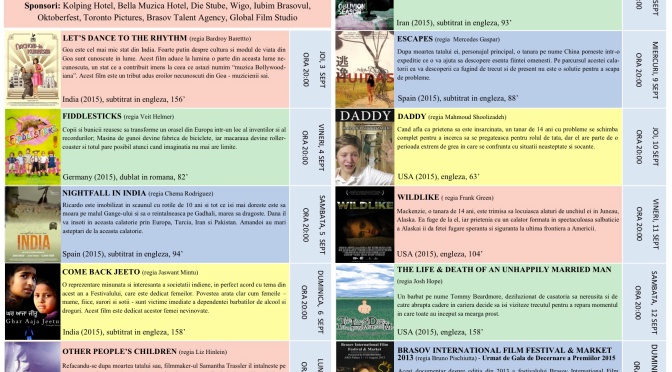 (Brasov, Romania) Thursday, August 20 — The 4th edition of Brasov International Film Festival & Market has announced today its lineup during a press conference held at the Kolping Hotel in Brasov.

The press conference was opened by Daria Trifu, Festival Director, and it was presented by Festival’s Artistic Consultant Bruno Pischiutta and Actress Denisa Barvon. Canadian Film Producer Elio Dell’Unto addressed the members of the press: “I am happy to be here, in Brasov, attending the most important nonviolent film festival in the world.”

Each year, the Festival is dedicated to a theme. Brasov International Film Festival & Market 2015 is dedicated to the women of the world, their problems and the challenges they face in different countries.

The films selected to participate in the Festival have been announced and the trailers of each one of the films was screened during the press conference.

This year, the annual DARIA! magazine celebrates it’s 10th anniversary. A special issue of DARIA! has been published, printed and presented to the media at the conference. The online version is available here (click on the cover to open the magazine; it requires few moments to open):

Brasov International Film Festival & Market is the most important and renowned nonviolent film festival in the world. It has been listed by the British Film Council in their ‘Festival Directory’. The Festival takes place in the beautiful resort city of Brasov located in the heart of Romania. A total of eleven films are presented each year; of these, nine films are screened in-competition and two are screened out-of-competition on the opening and closing gala nights. Each film in-competition is awarded in one of the nine Official Awards categories. In previous years, the Festival has screened films with/by Woody Allen, Nicole Kidman, Robert Redford, Will Smith, Cameron Diaz, Anne Hathaway, Bradley Cooper, Russell Crowe and Hugh Jackman.

Global Film Studio has been federally incorporated in Canada. It is a financing, holding and film distribution company with a world spectrum.

One thought on “The Lineup of Brasov International Film Festival & Market, 3 – 13 September 2015, Has Been Announced”