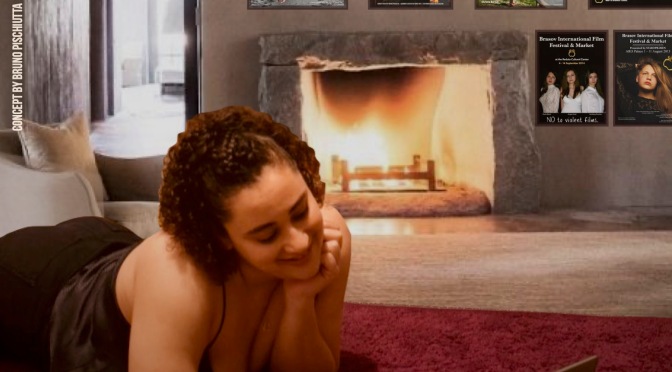 The poster is created on a concept by film director Bruno Pischiutta, and it features actress Kelly Dalston. It is designed and made by Daria Trifu.

The poster’s composition depicts the reality that the lockdowns created for people from all corners of the world: home entertainment is an essential component of every-day life, and watching films on-line is the new norm.

“In the many months spent at home during the COVID-time, we all adjusted to a ‘new normality’, part of which means choosing our entertainment from the most accessible source available, the internet. Watching films on-line, in the comfort of our home, is for many the only choice and it can be a really enjoyable family experience. The Global Nonviolent Film Festival offers to its viewers nonviolent films and documentaries from ten years”, says Daria Trifu, festival director.

Filmmakers should know that Global Nonviolent Film Festival is open for submissions. The ‘Early Deadline’ to submit a narrative film, documentary or music video is February 25th.

Submit a film via FilmFreeway

All films selected to participate at the Festival are showcased on the event’s streaming channel from September 23 to October 3, while they compete for awards and recognition. In addition, the selected narrative films and documentaries are guaranteed a distribution contract proposal from Global Cinema Online.

Global Cinema Online, scheduled to be launched by Global Film Studio in April, is a pay-per-view streaming platform for nonviolent films and documentaries that is well positioned to take a share of the ever growing video on demand market. It aims to become a notable competitor to the likes of Netflix and Hulu.